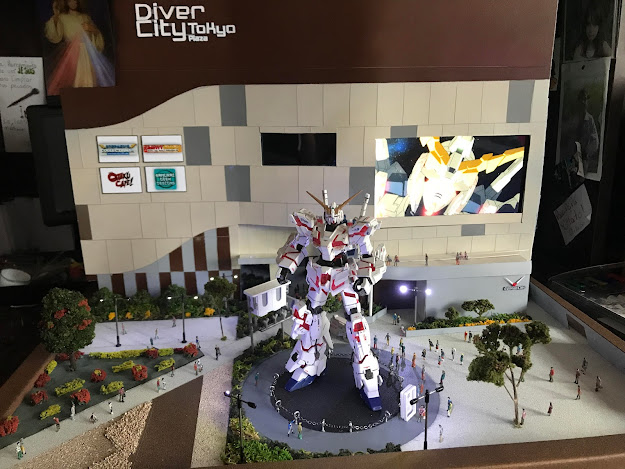 As with many things in Japan, giant mechas and giant monsters are very important sub-jects on their culture. In the late decades on the 20th Century, there was a myriad of giant mechas series on TV that were distributed very fast outside of Japan –I used to watch a series in Mexico in which giant robots lived inside a mountain and fly to fight monsters and whatnot.

Gundam is one of the most successful series of this genre that was released in 1979, in which there is no good VS evil script per se, but humans morals and behaviors take place in a war –each side thinking they are acting for the good of humanity. Gundam (Japanese ガンダム,pronounced “Gundamu”) is a contraction of the words “Gun Freedom”, so yeah, at first it was called “Gundom”, but it was not appealing to the Japanese culture of the 70’s, that was getting into the Western culture, including the English language.

In this sense, the futuristic Gundam series –produced by the Japanese company “Sunrise” -depicts all sorts of giant mechas (giant robots or machines (mechs) controlled by pilots inside them), with powerful weapons. The Gundam RX-78-2is the first and main character of the Gundam franchise, and there are many versions of it as model kits, all released by Bandai brand. Bandai released plastic models of airplanes, cars, and toys, since the 60’s. But in the 80’s it found its golden goose with the Gundam franchise, and 40 years and millions of plastic kits released later (called “Gunpla”, as in “Gundam Plastic Models”), it is one of the most successful Japanese brands of scale models, pairing up with other giants like Tamiya and Hasegawa.

One of this mechas is the Gundam Unicorn, that is piloted by a 17-year-old kid called Banagher Links, who tries to show adults that war is wrong. When he gets inside the Gundam he becomes one with the ma-chine, and all his feelings and thoughts are united with the circuitry in something that is called “Psycho-Frame” –an active crystal frame inside the machine -and the Gundam transforms into the most highly advanced of all the Gundam machines.

Gundam Unicorn is now a series on Netflix. The action sequences go hand in hand with many philosophical ideas of good, kindness, human logic, the reason for war, and the reason that must be peace among nations –yes, the now classic idea that the Japanese culture was affected in its roots by “Big Boy” and “Fat Man”. Noticeable is the mind-blowing logic of who’s wrong and who’s right in episode 6, minute 20, by the characters of Banagher, his archrival Char Aznable and the main female character Audrey Burne. I recommend it, so go ahead and check it out! Hey, it might even your induction to the Anime genre in movies, if you haven’t got caught yet.

So, the Japanese went ahead and built a 1:1 scale mod-el of the Unicorn Gundam. The Statue is located in Odaiba, an artificial island in Tokyo Bay, Japan. The 65-foot statue was unveiled on September 24, 2017, standing next to a Tokyo Plaza Mall called DiverCity. The statue opens its plates and shows the Psycho-Frame, that is lighted and fumes come out of its rocket exhaust, while a short of the anime is played in a giant screen behind it on the mall façade.

Adjacent to the statue is the Gundam Café, a place where food and drinks are all Gundam related subject. 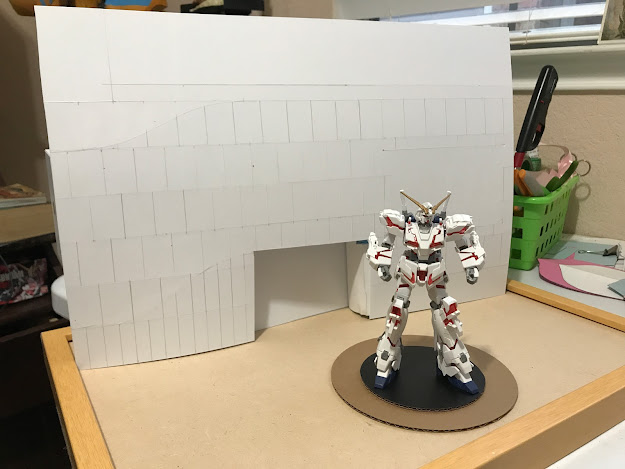 My diorama depicts the Odaiba plaza in front of the mall, with the Unicorn Gundam showing the Psycho-Frame. PLAZAI made the main plaza with a photograph frame for the whole diorama, using the back of the frame as a base. I applied texturized paint to simulate gravel and other kinds of flooring. The trees, grass and flowers are from Winmodo. The lighting posts are Evemodel, powered by 2-10-volt batteries in the back of the diorama.

The figure is a Bandai HG RX-0 Unicorn Gundam in Destroy Mode, in red Psycho-Frame. I repainted the whole inner frame with metallic paint, and the armor plates with acrylic white.

The idea is to leave it as clean as the actual statue. Nevertheless, a very light shadowing was applied with Tamiya Weathering Master for depth effect, and a spray of clear matte coat. The decals are waterslides from Bandai, instead of the stickers from the original kit.

The figure is placed in the diorama by means of a met-al rod in one of its foot that serves as anchor to the base.

I made the mall façade with a 5mm plastic sheet and treated with acrylic colors. I created the divisions (squares) with a hobby knife. The clear parts are made of acrylic plastic. I made the lettering with bond paper cut with hobby knife (from my days on paper-scale-modeling). The Gundam Café logo is made with an actual Bandai Gundam V-fin (the “antennas” in the forehead of Gundam mechas, a reminiscence of the Samurai’s “kuwagata”) and paper. The screen is an Amazon Fire tablet, that when connected to the Inter-net, I log in to my Netflix account and play the Gun-dam Unicorn series on it.

The back of the façade, or structure, was made of old iPhone boxes and blocks of polystyrene.

On the left side of the façade there are some logos of the stores inside the mall. I changed the logos of the mall to logos of local modeling stores here in San Antonio, Texas. Of course, I asked proper authorization form the store owners to display their store’s logos. Can you recognize them?

The people figures are Toogoo brand in N scale (1/150), and even when they were already painted, I re-painted them with acrylics to add details (eyes, mouths, cloth details and accessories... and some with eyelashes!). I also needed to sand the rough ends of the figures.

Every Gundam is a space-war-ship, and it is piloted by a human (or in the Gundam lore, a “Newtype” human), and has total control of the mecha. When you buy a Gundam kit, you’ll find that it comes with the figure of its pilot, that you can pose beside you completed model. There are 6 figures that are the actual pilots of 6 different Gundam kits, all in 1/144 scale, and that I painted with acrylics. I place them scattered in the diorama as a game for the onlookers of the diorama to find (think of “Where’s Waldo?”). 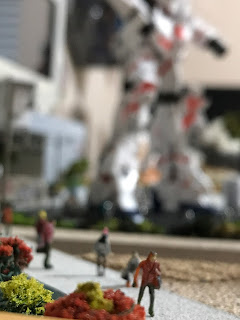 I really enjoyed building this diorama of the Odaiba Unicorn Gundam, and I learned a lot. As Gundam models are becoming more and more popular, especially among youngsters (and the young at heart), the Bandai company is not stopping here. At 40 years form its commencement, it looks like the Gundam franchise is just starting to take flight. Every month there are many new Gundam kits, roughly every 6-9 months there is a new Gundam anime series, merchandise galore, and the first upcoming live-action movie by Legendary Pictures, and Gundam filling up more and more tables on the IPMS events, maybe you also will get your feet wet on this category of scale modeling... and you are welcome to do it!